About NEPA and EISs

The National Environmental Policy Act (NEPA) was enacted to address concerns about federal actions and their effects on the environment. An Environmental Impact Statement (EIS) is the most detailed analysis prescribed by regulations implementing NEPA.

About the Infrastructure Upgrades

U.S. Air Force (USAF) and Department of Defense (DoD) strategies and initiatives for the Indo-Pacific are continuously evolving in response to the geopolitical climate. Strategies such as the 2001 Quadrennial Defense Review, 2017 Asia Pacific Stability Initiative, and 2020 Pacific Deterrence Initiative seek to promote an agile defense posture, protection of the nation, and defense of U.S. interests in the region. The proposed infrastructure upgrades at Andersen AFB would be conducted in alignment with these initiatives to improve operationally relevant infrastructure and would allow USAF and DoD to maintain agile and flexible defense capabilities.

As the U.S seeks to strengthen deterrence and participate in stabilization of the Indo-Pacific region, the USAF, in accordance with their responsibilities mandated by Title 10 United States Code 8062 to ensure readiness, needs to augment and adapt its forward presence capabilities. The proposed infrastructure upgrades at Andersen AFB would be conducted in alignment with the evolving USAF and DoD strategies and initiatives for the Indo-Pacific region to improve operationally relevant infrastructure, enhance U.S. forward-posture capabilities, and allow USAF and DoD to maintain agile and flexible defense capabilities. Through construction of infrastructure upgrades at Andersen AFB, the USAF intends to provide better capabilities for rotational aircraft and training detachments in support of U.S. national interests and maintaining stability in the Indo-Pacific. 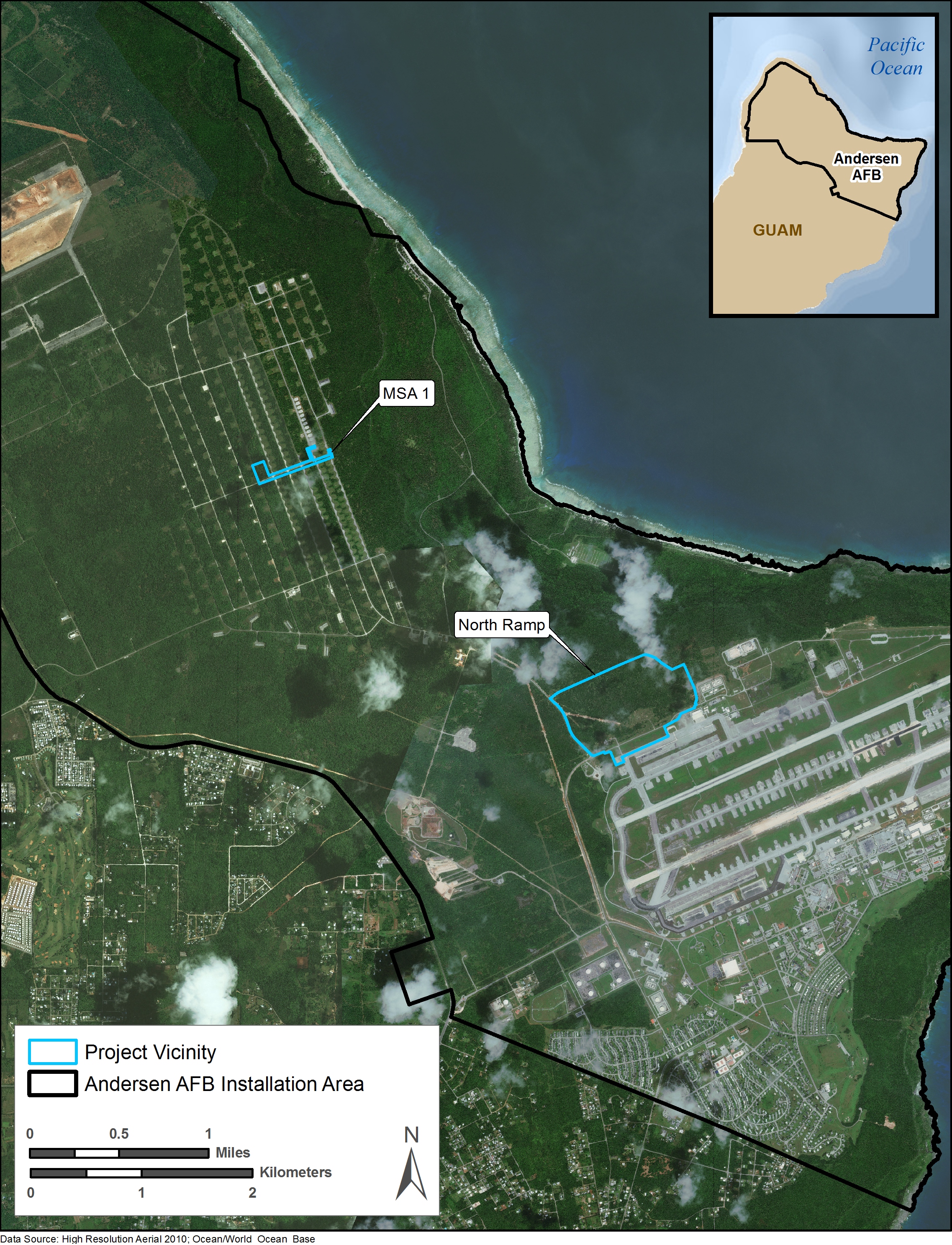 The Proposed Action is based on accommodating aircraft types and flight operations that have been addressed under previously prepared NEPA documentation for Andersen AFB, such as bombers, tankers, and fighters. Upgrading existing airfield and munitions infrastructure would allow Andersen AFB to better accommodate the forward presence of aircraft by providing improved facility capabilities that allow for greater efficiencies and agility in the way ground operations are conducted. The following proposed infrastructure would be constructed or installed at the North Ramp:

Additionally, the following proposed infrastructure would be constructed or installed within the MSA-1: 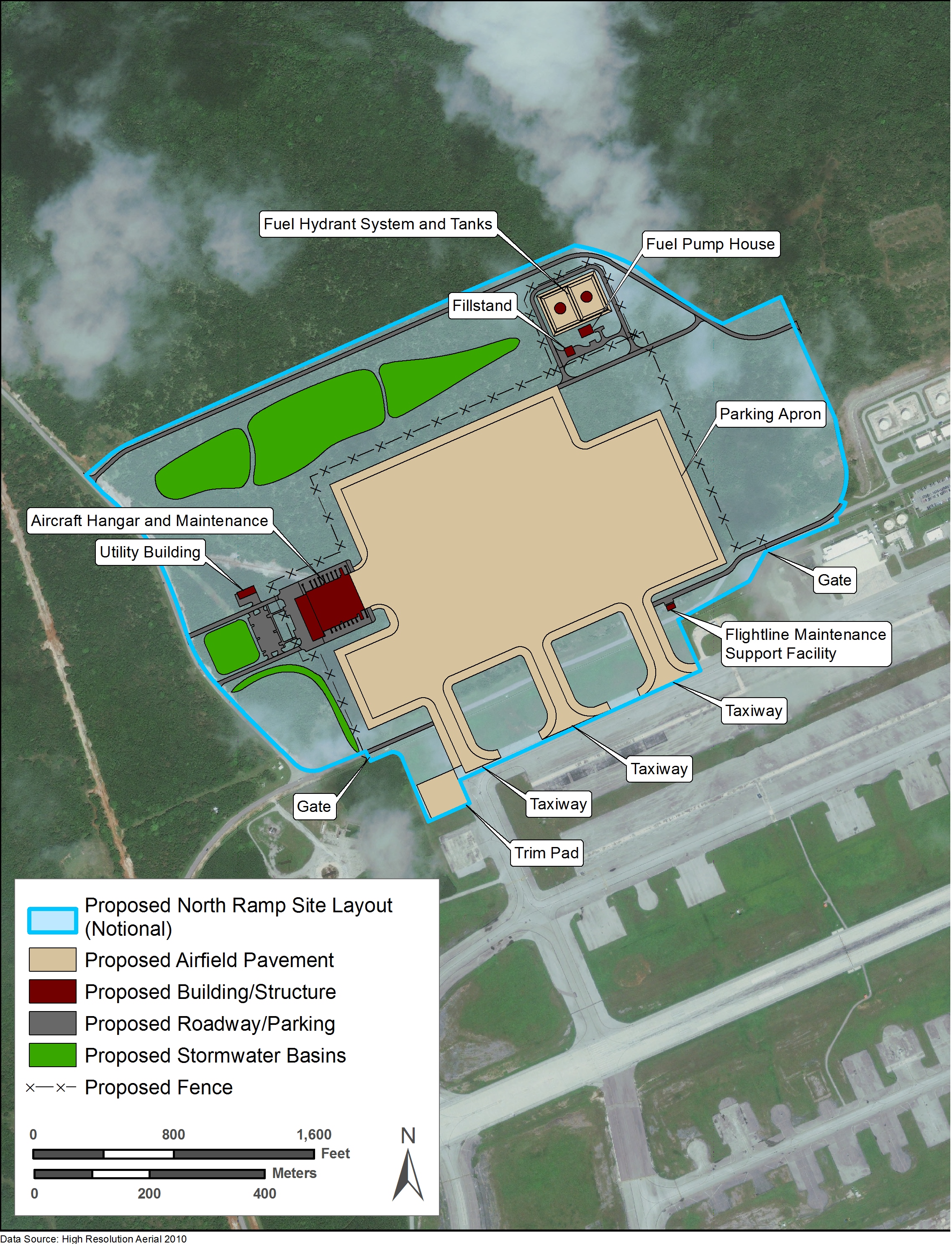 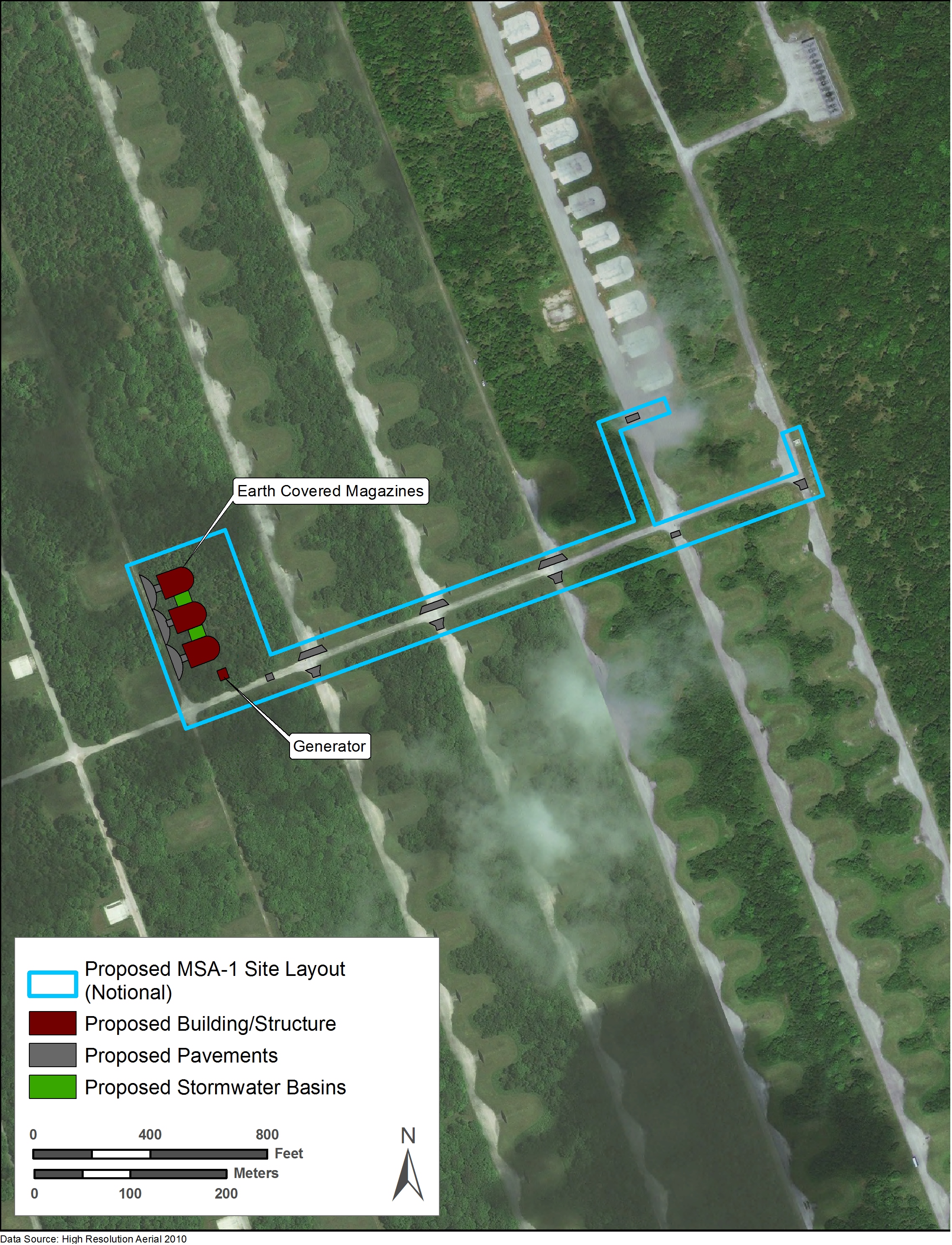 The National Environmental Policy Act (NEPA) of 1969 was enacted to address concerns about environmental quality. NEPA's main objectives are as follows:

What is an EIS?

An Environmental Impact Statement (EIS) is the most detailed analysis prescribed by the Council on Environmental Quality (CEQ) regulations for implementing NEPA. An EIS is a detailed public document describing a proposed action, all alternative actions that were considered, and the environmental impacts of implementing the proposed action and reasonable alternatives. CEQ regulations specify that an EIS be prepared when a federal agency proposes a major action with the potential to significantly affect the quality of the human environment. An EIS is required to “provide a basis of consideration and inform decisionmakers and the public of the reasonable alternatives.

Will this project expand Andersen AFB’s footprint on Guam, or is the project limited to existing Andersen AFB land?

This project will be limited to existing Andersen AFB land. Under this proposal, the U.S. Air Force is considering new infrastructure upgrades adjacent to the northwest corner of the existing airfield and within the existing munitions storage area at Andersen AFB.

Is this project related at all to the Marine Relocation, or is it something different?